He was only a teenager when he answered God’s calling. Feeling an overwhelming, unconditional love for the physically and spiritually impoverished population of India, he stood on an elevated rock amongst a bustling Bangalore bus station. He was only 16 years old, skinny, too young to even be part of the mission teams that proselytized in Northern India, and painfully shy. Yet he still stood on that mound, responding to the distinctive voice of God. He sang a familiar children’s chorus and then began preaching to a crowd of strangers, allowing the Gospel of Jesus Christ to fall from his lips like cool water to a thirsty desert.

This same teenager later studied under a scholarship at the Criswell Bible Institute in Texas and became pastor of a small Dallas church at the age of 23. But working amongst the wealth and affluence of America’s population led K.P. Yohannan back to his original call—to serve India and the desperate needs of Asia. His pastoral experience in the U.S. provided wholeness to his vision, focusing on the local church to take the forefront in God’s master plan for worldwide evangelism.

K.P Yohannan and his wife Gisela founded Gospel for Asia (GFA) in 1979. Gospel for Asia (GFA) is a Christian missionary organization that shares the Gospel with those living in the 10/40 Window, a region containing the largest population of people still unreached by the Gospel in the world. As a pastor, Yohannan realized the missing link in mobile missions was permanence. These regions needed church planters to tend to the seeds of faith and help them take root, flourish, and bear fruit… 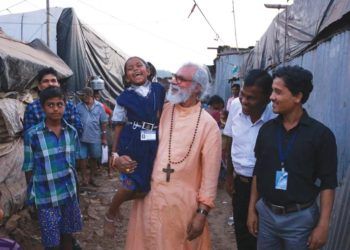