WILLS POINT, TX – Gospel for Asia (GFA World) founded by K.P. Yohannan, whose heart to love and help the poor has inspired numerous charities like Gospel for Asia Canada, to serve the deprived and downcast worldwide – Discussing Salbador, his struggle to provide for his family against poverty while enduring near constant chest pain, and his son’s persistent faith for healing for his father. 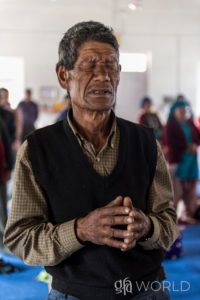 For 32-year-old Salbador, the past two years had been fraught with discomfort and pain. The father of three worked at a factory to provide for his family, attempting to keep them out of poverty. Long hours and tough labor resulted in severe, near-constant chest pain. Multiple hospital visits proved no help; the doctors could offer no relief for Salbador’s pain.

Salbador was a believer in name but didn’t fully follow in Christ’s footsteps. His 10-year-old son, Udahl, however, attended church faithfully. Multiple times, Udahl invited his parents to go with him, but they always found some excuse to not go, even after they listened to Udahl chatter excitedly about all he learned at Sunday school.

Join the GFA World Prayer Team as we lift up in prayer the people of Asia and their needs. Receive prayer requests for Asia with a special focus each month. You can have a part in ministering to those in need—through our most powerful tool: prayer.

Learn more about the GFA World national missionaries who carry a burning desire for people to know the love of God. Through their prayers, dedication and sacrificial love, thousands of men and women have found new life in Christ.